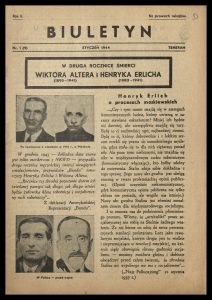 After Nazi Germany invaded the Soviet Union in 1941, Polish Jews who had fled there joined the Anders Army and began a long journey through Soviet Central Asia. After crossing the Caspian Sea, the Jewish and Catholic travelers who survived the journey were dispersed across Iran. Whereas the history of how these Polish Jews organized their lives in Iran has earned much attention, the three issues of this rare periodical offer insights into another aspect of life in Iranian exile: the community’s continuous support for the Jewish Labor Bund and socialism. This report highlights the execution of Victor Alter and Henryk Erlich, quotes Erlich’s statement that Stalin had nothing to do with real socialism, and promises that the true cause would continue on in their memory.