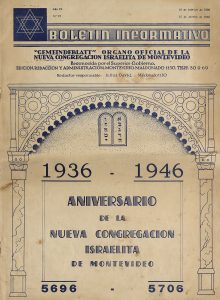 Edited by Georg Freund, a journalist and refugee from Nazi Germany, this weekly newspaper was produced to meet the needs of the German-Jewish community of Montevideo. Freund, the former editor of the Deutsche Allgemeine Zeitung in Berlin, brought his professional journalistic skills to bear on this small community newspaper in an effort to provide vital information about European events and to help new immigrants to Uruguay adjust to their life. The German-speaking Jewish community of Montevideo, the Nueva Congregación Israelita was founded in 1936, and the Gemeindeblatt was established two years later. By 1956, the paper had a print run of around 2,000 copies, including several hundred copies that were sent abroad.