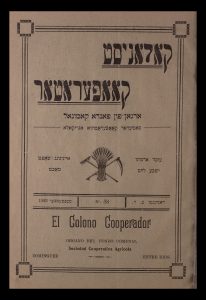 This rare periodical is a continuation of an earlier publication, Der Yudisher Kolonist, which aimed to connect the various Jewish agricultural settlements in Argentina. The magazine informed its readers about agricultural issues and shared news from the 18 separate villages. In 1917, it was relaunched under the title El Colono Cooperador in Spanish and Yiddish. Despite its primary focus on agricultural topics, the Yiddish section sometimes contained additional items of specific Jewish interest, such as news from Israel. El Colono ran to over 800 issues but was ultimately discontinued in 1986.