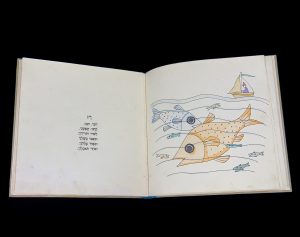 This rare picture book was hand-colored by Tom Seidmann Freud. Tom was the name that Martha Gertrude Freud, the niece of Sigmund Freud, adopted at the age of fifteen. Freud studied art in London and later married journalist, Jakob Seidmann. Together they set up the Ophir Press in Berlin in partnership with the Hebrew poet Haim Nahman Bialik. After their company went bankrupt during the Great Depression, the couple committed suicide within a few months of each other.