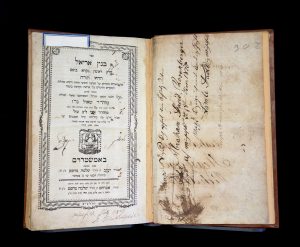 Abraham David Rosenberger’s signature appears across the flyleaves of the book revealing the name of one of the book’s owners. Abraham had recently adopted the surname Rosenberger in response to a ruling in 1787 that Jews were required to abandon their Hebrew patronyms in favor of German surnames. The repeated signature may represent his repeated attempts at practicing his new name. Alternatively, this may indicate Rosenberger’s ownership of the book according to the Jewish law of chazakah, whereby repeating an action three times sets a legally binding precedent.