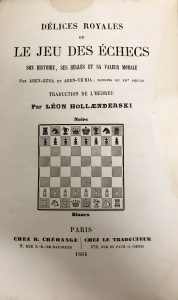 This rare 19th century copy of a Hebrew poem about chess was originally composed by the Andalusian Jewish polymath, Abraham Ibn Ezra. Ibn Ezra’s poem is regarded as one of the earliest written records to expound the rules of chess. Leon Hollaenderski’s reproduction and translation of the poem is dedicated to the French Jewish scholar and philanthropist, Albert Cohn (1814-1877). The preface is supplied by Salomon Ulmann, the chief rabbi of the Consistoire Central des Israélites de France (1853-1865). This book, along with the Price Library’s numerous other works on Jews and the game of chess, provides a nice complement to the Judaica Suite’s own bespoke chess tables designed by Kenneth Treister, and the magnificent chess pieces he donated to the Library from his personal collection.