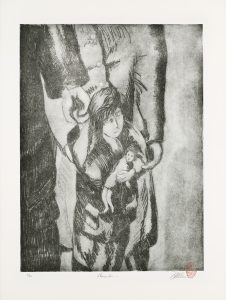 After retiring from his career as a physician, David Crown turned his attention to art and became the Founder and Director of the International Mezzotint Society. Crown created a series of twenty-six prints entitled “In My Lifetime” as a way to memorialize the Holocaust and to teach others about its history. The images for the series came to him in dreams, seizing him and demanding to be realized. He purposefully avoided abstract art, believing “the images had to be narrative and sufficiently realistic to have meaning.” This intaglio engraving is a part of that series.

View the entire series of prints