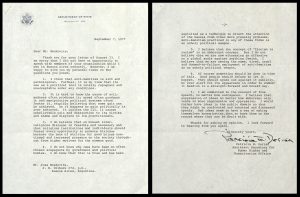 Patricia Derian’s letter was written in response to a survey created by José Moskovits, the President of the Argentine Association of Jewish Survivors of Nazi Persecution. Moskovits sent the survey to over 5,000 influential figures around the world in an attempt to gather their ideas about antisemitism. Derian responded to the survey while she was serving as the Assistant Secretary of State for Human Rights and Humanitarian Affairs. Prior to that role, she had championed civil rights and fought against racism in Mississippi. Her response and more than 900 others are held in the Price Library of Judaica.