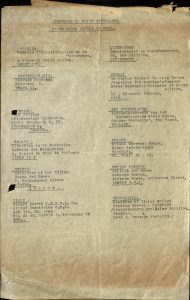 Richard M. Feist was a former member of the Jewish Brigade of the British Army and the Search Bureau of the British Army of the Rhine (BAOR). In his role on the Search Bureau, Feist corresponded with individuals familiar and unknown regarding their searches for relatives. He also forwarded care packages to displaced persons camps, Palestine, and elsewhere. The address list is a chilling reminder of the herculean task of tracking down the names of the dead and the whereabouts of the missing. It recalls the deadly conditions of the Neuengamme concentration camp and its subcamps where 42,900 people were killed and through which over 100,000 prisoners were transferred on to other locations known and unknown.