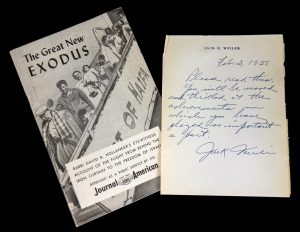 This pamphlet highlights the stories of Jewish immigrants who fled the Soviet Union for Israel. It was owned by Ruth Gruber, a trailblazing photojournalist, who in 1935 was the first correspondent to travel to the Soviet Artic. In 1941, she was appointed by the U.S. Secretary of the Interior to report on conditions in Alaska; in 1947, she chronicled the plight of the ship Exodus, and in 1985, she helped facilitate and document the rescue of the Ethiopian Jews. Inside the pamphlet a handwritten letter from Jack D. Weiler, a major Jewish philanthropist, urges Ruth to read its contents, assuring her that she would be “moved and thrilled” by the achievements in which she played so important a role.