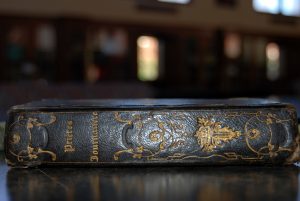 Crypto-Jews are secretly devoted to Judaism while publicly claiming another faith. The crypto-Jews who produced this rare Spanish translation, obscured their secret practices to protect themselves and their community. To conceal his identity to the public while identifying himself to his community, the printer spelt his real name (Brandon) backwards. The book was later bound in the early 1800s in Brandon’s hometown in southern France by the crypto-Jewish community that owned it. They further disguised its Jewish content with the half-leather binding. From a distance, the leather spine contains what resembles a cross with the accompanying nondescript French title “Prières journalières” (Daily Prayers).