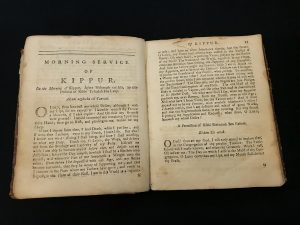 Isaac Pinto published the first English translation of the Jewish prayerbook for the High Holidays. Pinto was a Sephardi immigrant in New York and a member of Shearith Israel; the first Jewish congregation in North America. He soon discovered that many congregants were unfamiliar with the Hebrew language. Realizing the need for a prayer-book in the vernacular, he set about the translation himself. The result reflected British colonial rule and included a prayer for King George III. Yet, the fact that the first Jewish prayer-book to be published in English emerged out of a tiny Jewish community in colonial New York suggests that it represented the will of the American Jewish community to determine their own independent religious practices.