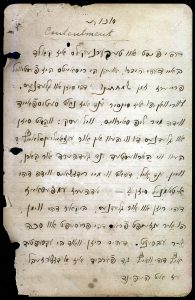 In the early 1900s, the mostly Lithuanian members of the B’nai Israel Congregation in Jacksonville, Florida turned to their homeland in search of a spiritual leader. Rabbi Joseph Shraga of Pokroi recommended his son Benjamin. Benjamin Shraga (Safer) arrived in Jacksonville in 1902. There he was the community’s rabbi, hazan (cantor), and mohel (circumciser). In adjusting to his role as rabbi, Safer composed sermons like this one using Hebrew script to represent English words. This method of transliterating English enabled the new immigrant from Lithuania to talk to his English-speaking congregation with confidence.