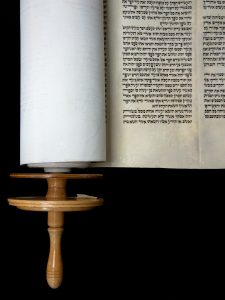 In the late 1970s, Rae Price of Jacksonville bought this Torah scroll and had it personally transported by a rabbi from Chicago to Florida. She donated it to the Beth Shalom Synagogue in Jacksonville in memory of her husband, Isser Price. When the synagogue closed in 2011, Rae’s daughters, Eunice and Florence, advocated for the scroll to be gifted to the Price Library.

The Machon Ot institute for Torah repair and preservation identifies this as a scroll that was produced in Russia in the early part of the twentieth century. The scroll’s “Ari” script reveals that the scribe was someone of Hasidic descent or influence. Most Torah scrolls are written over the course of one year on 245 columns of parchment. No mistakes in copying are permitted.