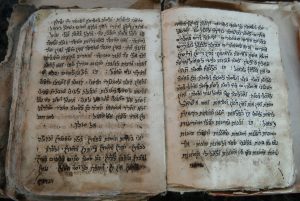 This fascinating Yemenite manuscript is a sum of its parts. In between the leather and sack cloth binding, in accordance with the Yemenite tradition of re-using worn religious texts as binding waste, are older parchment leaves containing texts of rabbinic literature. The pages include Hebrew hymns of lamentation (qinot), penitential hymns (selichot), and hymns and prayers known only from the ancient Yemenite rite. Astronomical texts in Judaeo-Arabic, including mention of lunar mansions and prognostications by quivering are also, bound into the codex. The paper itself was made in Venice: evidence of the robust mercantile exchange between Italy and the Ottoman Empire.