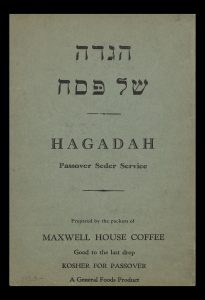 The Maxwell House Haggadah came into existence thanks to the ingenuity of advertising executive Joseph Jacobs. Jacobs inspired the Maxwell House Coffee company to launch a marketing campaign aimed at Jewish consumers. During Passover, Jewish stores would stop selling coffee on the assumption that coffee beans were a legume and therefore a forbidden Passover food. Jacobs gained the help of a rabbi from New York’s lower eastside to help spread the word that coffee beans were a fruit not a legume, and customers of Maxwell House Coffee were rewarded with a complimentary copy of the company’s Haggadah. The Haggadah incorporated the iconography of the Amsterdam Haggadah (1695) and established a simple Hebrew and English layout. This now iconic work has been issued every year, apart from the period during WWII when its printing was temporarily suspended.