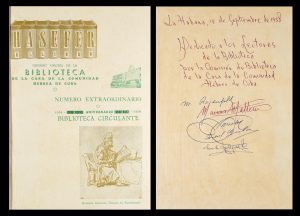 La Casa de la Comunidad Hebrea de Cuba, was built by the Jewish community of Havana in 1955. The center, designed by Cuban architect Aquiles Capablanca, was built to meet the needs of the city’s expanding Jewish population. In addition to providing a gathering space, the center housed the synagogue and its library. That same year, the library director, Abraham Marcus Matterin, launched the journal Ha-Sefer (El Libro) with the aim of chronicling the establishment and growth of the library, as well as engaging readers in its materials. In the aftermath of the large-scale Jewish exodus from Cuba in the 1960s, the journal ceased publication.