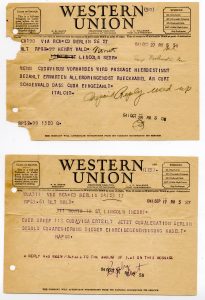 In 1941, Henry Wald lived in Lincoln, Nebraska, while his parents, Curt and Regina Schönwald, lived in Berlin. Three years earlier, Curt and Regina had been arrested during Kristallnacht and realized they needed to leave Germany. Curt and Regina managed to get their two children out of the country but could not procure visas for themselves. Between 1938 and 1941, the Schönwalds were forced to give up the popular department store they owned in Grossröhrsdorf, near Dresden, and move to Berlin.

From the U.S., Henry tried to help them obtain visas for Cuba. Yet, by the time they were approved, the Reich had ceased issuing passports to Jews, reflecting the change in Nazi policy from expulsion to extermination. Curt and Regina were deported in 1942 to the Trawniki labor camp. After that, the record concerning their exact fate falls silent.